The Life and Story of the Legendary Great Dane

Able Seaman Just Nuisance continues to capture the hearts and imagination of visitors to Simon’s Town. See his statue on Jubilee Square, visit his grave on the mountainside and call in at Simon’s Town Museum for a full history. 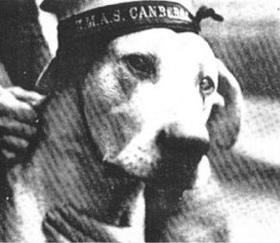 “Just Nuisance”, as the dog was to become known, was by all accounts born on Thursday, 1st April 1937 in Rondebosch, a suburb in the south peninsula of Cape Town.

At an early age, the pup was sold to Benjamin Chaney who moved to Simon’s Town to run the United Services Institute (USI). The USI was frequented mainly by the Royal Navy sailors- The Royal Navy at that time being in charge of the Simon’s Town Naval Base. This Great Dane soon grew to be a massive dog and it was here in Simon’s Town that he was to become a legend.

He was a very friendly dog and as such was treated to all sorts of titbits, pies and beer by the sailors who loved him and to whom the dog in turn took a great liking, especially as they would often take him for walks and as such, he considered that all sailors were his friends. He recognised his matelot mates by their bell-bottom trousers and square blue collars – they all looked pretty much the same to him, so every sailor was his friend! Servicemen in a different type of uniform were normally given the ‘by-pass’.

The Origin Of His Name

He started following them around and that led to the naval base and dockyards and eventually onto the ships moored alongside, with HMS Neptune being one of his favourite vessels. His favourite spot was to lie on the deck on the brow at the top of the gangplank. No one could easily get past him and he was loathed to move. The sailors would say – “You’re just a nuisance, why do you have to lie here of all places?!” – and that’s how he got his name.

Just Nuisance would regularly follow the naval liberty men when they went for a “run-ashore” in Cape Town some 22 miles and 27 stations north on the electric railway, but he always knew which station he wanted. He soon became well known on the trains and would jump on and off at different stations. Apparently, the sailors would try to hide him from the Ticket collector, but as he was such a big dog this was not always possible and he would be put off at the next station, but being a very clever dog, he would walk back to the previous station or just wait at the station in question and board the next train to continue his journey. A few times, when approached by an angry conductor, he showed how serious he was about rail travel by standing on his hind legs, putting his huge paws on the conductor’s shoulders and growling in the poor man’s face. Amused civilians would sometimes offer to pay his fare but exasperated railway officials sent a stream of demands to Mr Chaney his owner to confine the dog, pay his fares, or get rid of him. The railways finally warned that they would have to put him down if he persisted in boarding trains. This resulted in a massive outcry from his sailor friends and other people in the Peninsula who had come to know him well. One amused regular passenger even offered to buy him a season ticket but the Royal Navy had already put this in hand…

Many letters were written to the Commander-in-Chief of the Navy at that time. After much thought, he decided to enlist him into the Royal Navy! Not only would this brave act save Just Nuisance but it would also raise his profile almost overnight and certainly guarantee that he would become one of the world’s most famous dogs. It was a wonderfully simple solution to his love for train-hopping – a “volunteer” enlisted during the War was entitled to a free pass on the train!

On Friday, 25th August 1939, Just Nuisance was enlisted into the Royal Navy. He has given the Christian name of Just the Trade of ” Bone Crusher ” and his Religious Denomination as given as ” Scrounger ” (this was later upgraded to canine Divinity League [Anti-Vivisection]). Like all new sailors, he underwent a medical examination which he duly passed and was declared fit for active duty. The proper enlistment forms were filled in and he signed them with a paw mark. Just Nuisance was now a bonafide member of the Navy and, as such, he expected all the benefits that brought – he started sleeping on sailors’ beds – his long frame fully stretched out with his head comfortably placed on the pillow. One of the seamen was allocated to ensure that Just Nuisance was regularly washed and he often appeared at parades wearing his seaman’s hat. Sailors being sailors there was the odd fight. Just Nuisance did not like his sailor friends to fight each other. If he came across a fight he would quickly put a stop to it by standing up on his hind legs and pushing his huge paws against their chests. After a short, while he was promoted from ‘Ordinary Seaman’ to ‘Able Seaman’, which entitled him to naval rations?! Just Nuisance was equally at home on any ship that called in at the port and was loved by everybody who met him through his main interest was only with other ranks.

Just Nuisance’s train journeys also did not stop with his enlistment. Oftentimes he would find a drunken sailor on the train and escort the man back to his bunk in Simon’s Town. Some sailors “helped back home” were not even stationed in Simon’s Town!!

As Just Nuisance had become such a celebrity, he was often required to assist the War Effort by attending functions. A marriage between him and Adinda, another Great Dane, was arranged. Five puppies resulted from this union and two of them, Victor and Wilhelmina, arrived at an almost ticker-tape welcome at Cape Town station where they were auctioned by the Mayor of Cape Town for war funds.

Sales of a book about him (” Just Nuisance – Able Seaman Who Leads A Dog’s Life” by Leslie Steyn), as well as postcards of him with his pups, were also raising large sums of money.

Just Nuisance never went to sea, but used to go AWOL (Absent Without Leave) to Wingfield where he would be taken up (albeit totally illegally) to look for submarines by the pilot of the plane in the background of the accompanying photograph, which was a Fairy Fulmer – a coastal reconnaissance plane used to spot enemy submarines off the South African coast.

All things considered, Just Nuisance was more than just a dog. He did much to boost the morale of all those involved in fighting the War from the South Atlantic Station and he was renowned for the love and care he showed for his sailor mates. However, Just Nuisance was no angel, as his “Conduct Sheet” shows. He was guilty of several misdeeds, such as travelling on the train without his free pass, sleeping on a bed in the Petty Officer’s dormitory, going AWOL, losing his collar and resisting eviction from pubs at closing time. His most serious offence was fighting with the mascots of other Royal Navy vessels. He caused the death of the mascots on both the HMS Shropshire and the HMS Redoubt.

The End Of An Era

Just Nuisance was discharged from the Royal Navy at HMS Afrikander where he had been “stationed” since 1940, on Monday, 1st January 1944. Great Danes never live to a great age and a motor accident had left him suffering from thrombosis which was slowly paralysing him. On the recommendation of a veterinary surgeon, the Royal Navy decided to put him to sleep. So, on 1st April 1944, the day of his 7th birthday, Just Nuisance was taken by lorry for his last ride to the Simon’s Town Naval Hospital, seemingly knowing what awaited him, where the Naval Surgeon then put him to sleep. On Saturday, 2nd April 1944 at 11:30 am, his body was wrapped in a canvas bag, covered with a white Royal Naval Ensign and he was finally laid to rest with full military honours at Klaver Camp on top of Red Hill (the current site of the South African Navy Signal School) – a solemn ceremony that included a firing party of Royal Marines and alone Bugler. A simple granite gravestone marked his grave.